My daughter is now 17 months old. My excuse has grown old.

With a wet New England winter approaching (again), my trailer must have its windows soon. The plastic sheets taped over the rough openings in the trailer are tattered. They won't last another winter.

Inspired by cold weather, I retrieved the large box of windows in my basement where I stashed them nearly two years ago. 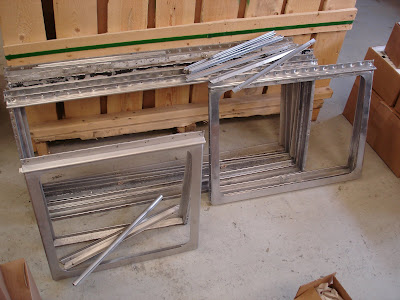 There are 6 large windows (4 make up the Caravanner's trademark "Panoram" on the street side) and 3 smaller windows on the curb side. All 9 windows are Hehr Standard windows with gear type operators, as was the norm on 1956 Airstreams.

Hehr (brand name) Standard (model name) windows were the most commonly used windows in the vintage trailer world for all types of trailers built in the 1950s and well into the 1960s. They were used on Airstreams starting in 1952 and used as late as 1960 on a few models. They were used by canned ham trailer makers throughout the 1960s. They are now obsolete and the only parts available are those we've had reproduced.

After 50 years of neglect, my windows were in desperate need of restoration. Rusty steel fasteners, latches, operators and channels all needed replacing or de-rusting. The aluminum was, at best, heavily oxidized. At worst, it was heavily corroded. The glass was scratched. The vinyl rubber gaskets dried and shrunk. The galvanized steel insect screen was heavily corroded to the point of reducing visibility.

In subsequent posts, I'll talk in detail about how to properly and completely restore the back frames and the front frames.