We'll never know what the interior of trailer #O9003 looked like when it left the Ohio factory. We can look to other '56 Caravanners for hints, but there were many customized options in the 1950s so it's unlikely this one looked just like the others. Before deciding on details for the restoration, I need to do a lot more research about what was going on in the travel trailer world in 1956.

A good place to start is RJ Dial's archives. Thanks, RJ, for creating this priceless resource.

Another good resource is Airstream's original documents. The Vintage Airstream Club has some of them posted online here. In this case, looking for both 1955 and 1956 info is very informative. I found out, for instance, that the retail price on my trailer was probably about $3,100. That's about $22,000 in today's dollars...a bargain for a premium 22' travel trailer, unless you consider these other prices for 1956:The average annual salary was $5,300 and the minimum wage was $1/hour.

Without a doubt, the best resources for advice and inspiration for my Caravanner are fellow vintage trailer owners. You can meet the most warm and generous people when you reach out in email discussion groups, at rallys, and at AirstreamForums.com. If you own a 1956 Airstream or a 1950s Caravanner, and want to compare notes, please send me an email.

Doing a big project like this, you have to make hundreds of decisions along the way. Many of those decisions revolve around your overall goal in the project. Do you want to restore your vintage trailer to original condition, or do you want to customize it?

My goal for the exterior is to restore it as much as possible. We might have to make a few compromises when original parts or materials are no longer available, but hopefully you'll never notice. Windows and vents may move a bit to accomodate the new appliances and floorplan, but those changes will be in keeping with other 1956 Airstreams.

I don't feel the same way about the interior. If you're really going to use your travel trailer when it is finished, you want to make it really comfortable and practical for the way you intend to use it.

On the other hand, I hate to see the older and rarer trailers fitted with interiors that don't look right for the era. In this case, I hope to accomplish that mid-century feeling with today's comfort.

The real work won't get underway until late winter. At that point, we'll rent a dumpster and start gutting. We'll save anything that is original to the interior or that might be salvageable for another trailer.

After emptying it out, Colin and his techs will remove the lower half of the interior shell and tear out the rotting floor. When they get it stripped to that point, we'll be able to clearly assess what kind of frame work we'll need to do.

For now, I just need to be patient and dream about camping in warmer weather. . .

Michele's a good sport and puts up with a lot, but even she has her limits. To win her approval for this hair-brained project, I made five promises. Here they are, ranked from least important to most important:

Did I mention I don't own a tow vehicle? When I sold my beloved 1967 Caravel I sold my tow vehicle, too. Michele and I were buying a house and we needed every penny for the down payment. We decided we could live with one car for a while...a little sedan.

The Caravanner needed to be transported 300 miles from Connecticut to Colin's shop in Plattsburgh. With gas prices high, the cost of commercial towing can be as much as $3/mile. If you need a flatbed it can be even more. It looked towable, except for one thing. 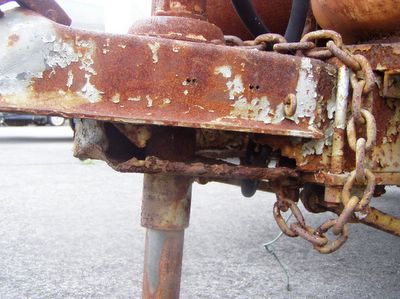 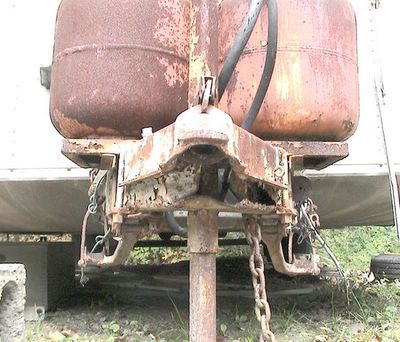 Notice the Frame to the Right of the Ball

Professional towing services expect a hassle-free job. When they show up, they expect the trailer to be in safe towable condition with running lights working. If they show up and it isn't ready, they walk away.

I knew that rusty tongue might be enough to kill the deal. And the lights were bad, too. At least the coupler latched well. Colin had a friend who was comfortable with old trailers and he agreed to do it. Keeping my fingers crossed, I sent the driver a set of temporary towing lights and a roll of duct tape. Within a couple weeks, the trailer was on the road to Plattsburgh, it's winter home.

I just had to go see it.

I've bought 5 other vintage Airstreams over the past few years; only two of them for myself. I've learned you can't tell the whole story with photos. You have to see it and smell it in person.

I drove the 200 miles to Connecticut, hoping for one of those rare trailers that looks better in person and "just doesn't photograph well." Upon inspection, it was clear that Cliff was an honest seller and the trailer was exactly as he represented it in the photos.

He had wanted my opinion on the price. I told him that, considering the model and year and the fact that it had a great low serial number (#O9003, which means the 3rd Caravanner ever made), it might be worth $2000 to the right buyer. I just wasn't the right buyer. I knew it would need just about everything, from a new axle, frame repair and a new floor, to an entirely new interior, electrical and plumbing, to a host of exterior door, window, vent and shell parts.

I headed for home empty handed. But a few minutes after I left the driveway I called Michele. I told her about the condition and that I still liked it. No matter what 50s trailer I started with, I knew I'd probably need to do extensive frame, floor and system work, so why not start with an inexpensive trailer. If we started with this one, in the end we'd have a brand new trailer inside a classic 1956 shell. We had a discussion about the value of making mortgage payments vs. the value of restoring a vintage Airstream. Overall, though, Michele was not adamantly opposed.

As soon as I hung up and still on the road home, I called my friend Colin Hyde in Plattsburgh, NY. I live about 2 hours from Colin's restoration shop and I knew the only way I could do this is with a lot of his help. Colin restores vintage Airstreams for a living. I'd seen his work and it was first-rate. His attention to engineering as well as aesthetics was just what I needed. I knew Colin would be the guy to do the big projects...especially early on...that I didn't have the skills to do.

I gave Colin a full description over the phone and he agreed it was a project worth doing. I called Cliff back and we agreed on a price significantly lower than my first suggestion. We were both pleased and I turned around and drove back to hand him the check.